Who doesn’t love dumplings? I know I do! Quick and simple to eat and comes in a variety of flavors too.

I was inspired to share my homemade recipe today as I have a very close friend who has an extreme weakness for dumplings. He can eat 40-50 in one sitting. Why not share the joy and make them yourself instead of paying exorbitant prices for them. Dumpling making is also a great way for couples to spend a lazy Sunday afternoon at home in the kitchen bonding over cooking.

They are so easy and low in cost to make. Plus, you can always make many and freeze them to be enjoyed later. Isn’t it great to know what you are putting in them during preparation instead of eating a commercial one stuffed with pig lard flavor enhancers?

They are made in one way but can be cooked in three different ways – boiled, steamed or pan fried/grilled all depending on your mood and preference.

Cantonese Dumplings are usually stuffed with ground meat fillings inclusive of pork, chicken, mutton, beef, fish and mixed with a variety of chopped vegetables -scallions, leek, celery, cabbage or garlic chives. They are wrapped in a very thinly rolled piece of dough, which is then firmly sealed by using the pressure of your fingertips to press the edges together.

Today I will guide you step by step through my scrumptious dumpling recipe so you can produce your own!

You can substitute my choice of meat to any of your personal preference, it will be just as delicious. If you are vegetarian you can fill up the dumpling with lots of great veggies such as carrots, onions, scallions and Chinese cabbage. 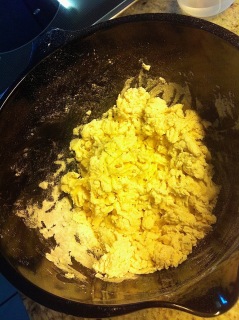 Take the dough out and on a flat surface use your hands to roll it down to even out the texture. Continue doing this for 3-4 minutes. Tip: While rolling, pretend you are closing an envelope. Fold over and then press down and repeat. Once completed, roll into a firm ball and put back into the mixing bowl to rest. Cover with a damp cloth to retain moisture for 30-40 minutes. 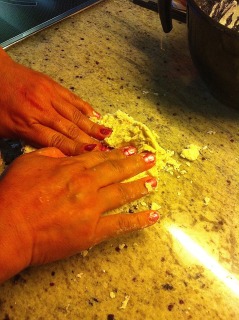 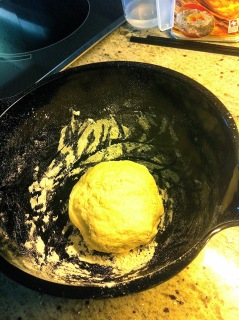 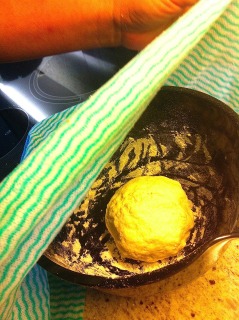 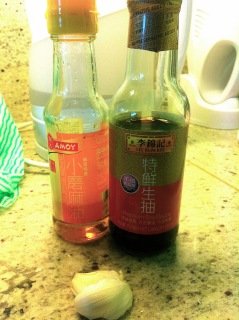 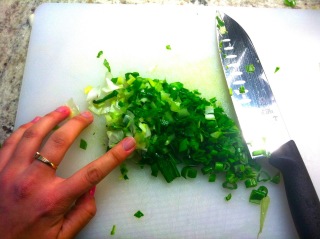 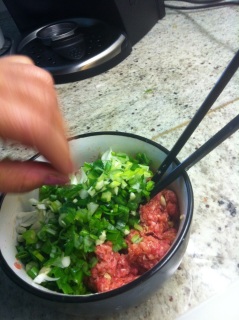 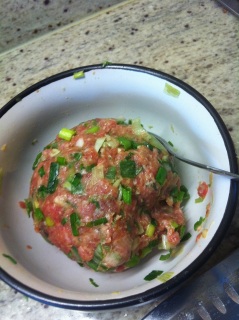 Once the dough has set, remove it from the mixing bowl, tear off pieces and roll it with your hand so it looks like a mini rolling pin. Stretch it out and make sure the texture is elastic-y.

Cut off small pieces of the dough and set aside. 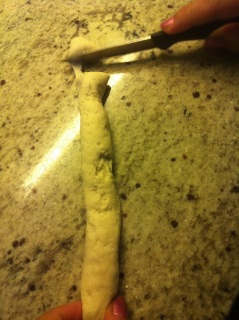 Using your palms, roll out the small pieces of cut dough so that they are formed into balls. After you have rolled them, press down so that they form a flat circle. 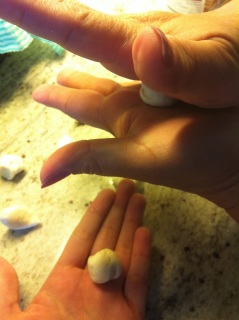 With a rolling pin flatten out the pressed balls to make a small pastry for the dumplings.Make sure you are rolling on a flat surface coated with flour so the pastry doesn’t become sticky or break.

It’s time to stuff the dumplings! Place the pastry in the palm of your hand and using a spoon, scoop a heap of mixture into the dumpling. Try not to get it on your fingers as it will complicate the ‘crimping’ or ‘sealing’ process.

To seal the dumpling, pinch the middle first and then work on the sides by folding in creases as if you were sewing but without the needle. Two creases on each side is recommended. To know if your dumpling has been done correctly, it should be able to stand on its own. 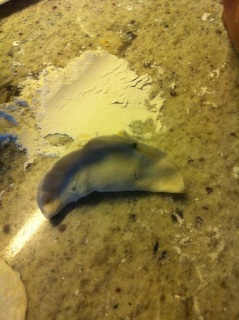 Try not to get stuffing on your fingers when folding the dumplings, it complicates the process and makes it difficult to seal.

If you choose to freeze any ‘extra’ dumplings, make sure they are placed with a small gap in between each to avoid them sticking together. Once they have frozen you may transfer the dumplings to a freezer-plastic bag to conserve space.

When boiling fresh dumplings there is a slight trick to have them cooked to perfection. Once the water starts to boil place the dumplings in, when it starts to boil for the second time add some cold water and wait for the third boiling and repeat this step. Voila! They will be firm and well cooked.

If you are opting to pan fry the dumplings add a small amount of oil to a pan, add the dumplings, let them brown on one side and add 1/4 cup of water and cover with the lid.