Quay Restaurant is where Peter Gilmore’s mouthwatering and ‘nature-inspired’ world class Modern Australian cuisine is the centre of attention amidst Sydney’s spectacular harbour.

In 2013 Quay was voted Number 48 on the coveted S.Pellegrino World’s 50 Best Restaurants list maintaining it’s position on the list for the fifth year in a row. It’s definitely a place that will make your tastebuds dance.

I had the great pleasure of dining here with my best friend Mr.S who is a Sydney local. We were lucky enough to score a last minute reservation on a Monday night, an almost impossible task as it was completely full with one 9PM opening for two.

As we were being seated at a lovely corner table I couldn’t help but gasp at the breathtaking views of the Opera House and Harbour Bridge. I finally came to terms with how beautiful the city looked that night.

There are two types of menus available at Quay. The first is a tasting (degustation) menu with wine pairings for $225 per person, but we settled for the second choice. You choose three savoury courses and one sweet. They gift you with a boxed petit fours after your meal as well. This menu choice is satisfying, and to me, more compelling than the multiple extravaganzas that go on when your buttons are bulging and interest is fading. ($175 per person) 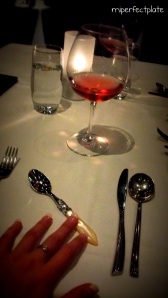 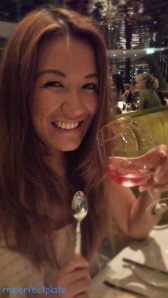 All delicious-ness aside, this was the highlight of my evening. What i’d like to officially call a ‘savoury aperitif’ in my foodie vocab. The waiter brought out what looked like a handle-less teacup with chestnut puree at the bottom and then proceeded to pour oxtail broth into it with a ceramic teapot. I wrinkled my nose at first as I thought the combination was strange, but of course, I never fully judge until it’s gone into my mouth.

To me, that was the best surprise I have had in a long time. The saltiness of the broth was a perfect match for the puree no doubt. I scooped it all up until I was scraping the bottom with a very unhappy look on my face as it was over too quickly.

There are two things which I disliked about The Quay. The first one being the walking pace of the waitstaff. This may sound absurd but when you are trying to enjoy your meal it doesn’t feel pleasant when the waitstaff are walking up and down the aisle to and from the kitchen in a more than hurried pace. Made me feel slightly jittery.  I also found the furniture and decor to be slightly bland. It is classed as fine dining but I would lean more towards borderline smart casual. The most peculiar thing is the background music didn’t start to play until around 10 PM.

Patiently waiting, the first course arrived. I had the signature fragrant poached chicken with white radish, Tasmanian sea scallops, smoked eggplant cream and pea blossoms. Gilmore notes that this dish was inspired by the classic Chinese master stock chicken. Besides the excellent flavour, the layering of the dish was artistic and very daring as the majority of elements used were white in colour.

The smoked eggplant cream is made by cooking them in the oven for an extended period of time, placed into a cold smoker and finally pureed and oiled to make a cream. The poached chicken was very succulent with an addition of the velvety raw scallops sliced to thin discs, and the homemade silken noodle made of wheat flour and kuzu starch gave it the extra chewiness. The Japanese radish is salted, sesame oiled and braided to give the dish extra texture. I think this concept is genius! The dish also includes Chinese artichoke which has the same texture as water chestnut for that extra crunch. The last element of this dish is the milk curd which can easily be mistaken for tofu and finally, garnished with snow pea flowers to add a real elegance to the dish.

Mr.S chose the Congee of Northern Australian mud crab, fresh palm heart, egg yolk emulsion. I believe this dish was inspired by the authentic Cantonese version but of course done to a level of culinary decadence. It is made with delicious crab stock with fatty crab flesh and a soft but generous fistful of egg-yolk emulsion.

Left with mouths watering and wanting more, the second course arrived. I picked the Roasted goose with forbidden rice, black miso and hatsuka radish. Not going to lie, one of the main reasons I chose this is because I absolutely had to know how ‘forbidden rice’ looked and tasted. The goose meat was as tender as they come and the miso infused ‘forbidden’ rice was far from disappointing. I loved the very-smokey flavour of the rice and the crunchiness of the hatsuka radish. 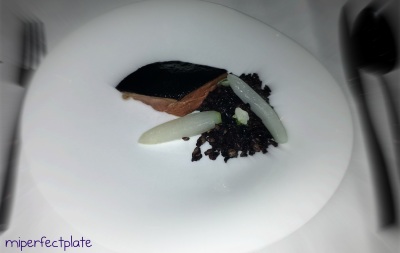 He went for the Red claw yabbies with a garlic scented custard and yabby velvet. For those of you who don’t know what a ‘yabby’ is, it’s an Australian freshwater crustacean. Resembles a cross between a prawn and a lobster.

The yabby meat is poached and fanned across two luxurious and mildly salty puddings. One being the garlic scented custard and the other a silkened tofu. It is scattered with gai-lan flowers and a broth (again with a ceramic teapot) is poured to create a sea-broth, almost like a moat around the yabbies. This was also a great choice and more than delightful.

I had to try the slow cooked partridge on a porridge of malted ancient grains, roasted hazelnuts and truffles for my last savoury course. Simply because I had never had partridge before and was very curious to find out all about it. This had to be my least favourite dish though, only because I found the partridge meat to be a little too tough for my liking. I loved the porridge of malted ancient grains. Very smooth and flavourful. 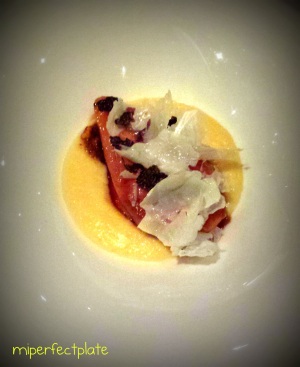 Mr.S chose the Pasture raised veal on a bed of bitter chocolate black pudding with green walnuts, slow cooked wallaby tail, salsify, smoked bone marrow and chestnut mushrooms. He claimed this to be his favourite dish of the night. Said it had a real earthy but juicy taste about it. The chocolate-laced blood pudding dissolves to a sauce and the combination of smoked bone marrow and baby chestnut mushrooms were a rich but complex climax before the beautiful desserts arrived.

Even without the notes, or pictures, I believe you will always be left with a collective memory of beautiful things luxuriating across your tongue, palate and lips. Flavours you can recall when you close your eyes and aromatic sensations when you dine at places like this.

Remembering the Masterchef Season II finale, I had to try the snow egg dessert. It is what made Adam Liaw’s victory. Apparently one of the most complex desserts to ever make! As Gilmore says, it is a dessert which uses all senses. You are awed from the moment it reaches the table as it is so pretty to look at, to the cracking sound of the first bite to the smoothness of the ice cream on the inside as it hits your tongue. The fruits they use depend on the season, this time around it was raspberry. During other seasons it comes in guava or jackfruit. I would love to try the jackfruit at some point, it just sounds so different and unlike any fruit which would be used in this way. A very iconic dessert indeed. 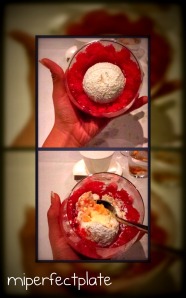 We also tried Quay’s Eight texture chocolate cake. Initially a Five texture cake, Gilmore took it up a level. Different elements of chocolate, caramel, vanilla and dark chocolate are used. They perform a trick when they bring the cake out to you. During preparation, they make a hole underneath the final chocolate layer on top which is a fine disk, then they pour hot chocolate sauce on top of that. The heat from sauce fall throughs the centre, giving us the illusion that the sauce melts through the cake. Very theatrical and hands down wonderful. I would not recommend this to those who cannot handle rich chocolate. This is by far the richest chocolate cake I have ever had.

All in all a fantastic night with great company. Only minor glitches like dessert wine being poured to us as we were sharing a wine cooler with four other bottles. Otherwise I loved how the wait staff weren’t the snooty type, really friendly and down to earth. A big thumbs up from me and I will be returning on my next trip to Sydney.

Friday, Saturday & Sunday evenings are booked out 6 months in advance for bookings of two and four guests.

On Thursday 1st August 2013 we start taking table reservations for all dates in February 2014.

So yes, a reservation is definitely recommended. To save disappointment, go on a weekday like we did.